Train to Busan (2016) established that there is both room and potential for zombie flicks in Korean cinema, and there has been a flood of undead-themed films and TV series in the past few years, with their makers hell-bent on achieving the same success as Yeon Sang-ho‘s action thriller. Some of the K-zombie projects, surprisingly, delivered high-quality stuff – this year’s Netflix-produced Kingdom being just one of them.

It really was just a matter of time before Korean filmmakers decided to take the genre’s road slightly-less-taken and tackle a zombie comedy. But then again, this is K-cinema we’re talking about, so there should be zero surprise that the first attempt has more than just one level. So, what happens when the zombie apocalypse starts in the god’s honest boonies of South Korea, where the farmers haven’t even heard of a zombie?

On the outskirts of a sleepy rural town Poongnam, Park family lives next to a gas station that stopped operating years ago. Joon-gul (Jung Jae-young) is the pitiful oldest son of the patriarch Park Man-deok (Park In-hwan) and he provides for the family by scamming others – he sets up big city folk’s cars to crash in the middle of nowhere at night, then shows up like a hero, repairs their cars and overcharges them to the nines. His partner in ‘crime’ is his pregnant wife, Nam-joo (an unrecognizable Uhm Ji-won), who seems to have a violent streak going; and let’s not forget the youngest Park, Man-deok’s teenage daughter Hae-gul (Lee Soo-kyung), who seems to be as near-sociopathic as the rest of the family and whose pets seem to have a habit of mysteriously dying.

The family Park’s miserable existence gets disrupted twice in one day – first by the return of the prodigal middle son Min-gul (Kim Nam-gil), another scam artist. As Min-gul returns, a ragged young man (Jung Ga-ram) appears out of nowhere, aimlessly wandering the countryside – after a few funny moments, he gets stuck in a nearby public toilet where in an altercation, he bites Park Man-deok. It does not take long before the intruder gets captured by the Park family, who at first take him as nothing more than a rabid hobo; and it’s comes as no surprise that it is the ‘worldly’ Min-gul who first figures out the truth. Their zombie prisoner, now chained to the wall of their garage, gets named Zzong-bi, and just as they are pondering what to do with him and his surprising affinity for cabbage heads, the situation takes another turn: Man-deok, the day after he got bitten, seems to have shaven at least 20 years off his life, as if he was injected with youth: and in the countryside, full of ageing men, youth IS the highest currency. 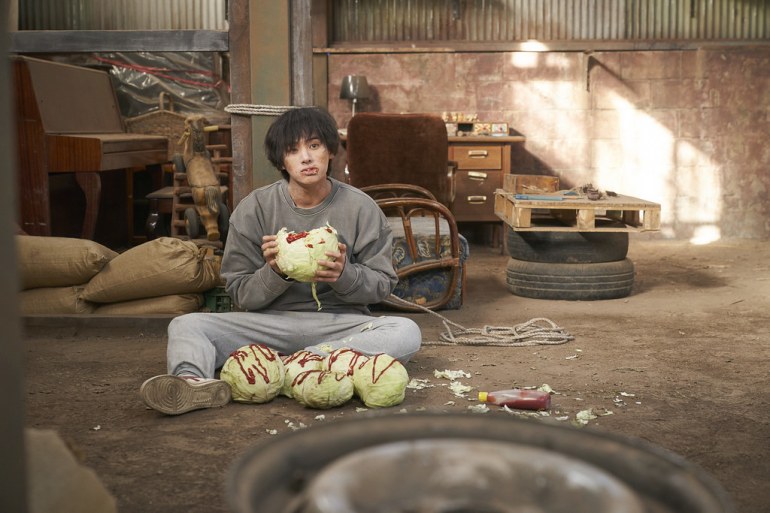 Even though it is obvious that it is somewhat flying on the wings of Shaun of the Dead (2004) and Warm Bodies (2013), The Odd Family: Zombie on Sale manages to prove that there are still ways to be original about a zombie movie. It starts out slow, then takes its time with quick-witted jabs and some slapstick comedy that runs constant throughout the film, with a bit of sweet, but hilarious zombie romance thrown in the second half, before it picks back up with the gore and the horror that are the must-haves of zombie genre. What is perhaps the most original element of the film is the way it toys with the idea of the male obsession with virility, marrying it to the zombie genre like it has always been meant to be. Also, in this film – for the most part – it is the humans that seem to be a lot more sinister than the original zombie, who seems to be cute even when he is out to bite someone.

What really makes this film work is its superb cast (someone tell Kim Nam-gil that he needs to do more comedy) and perfect comedic timing, and unlike so many Korean movies, the film does not run out of steam towards the end, but dishes out the perfect final punch, which is a part of why the Udine Far East Film festival audience welcomed the film with such enthusiasm. It’s hard to believe that this is the directorial debut for Lee Min-jae, but the overall quality of the film, down to how separate cuts are made and how the sequences play out, starts to make sense when you learn that he has previously worked as a film editor – and that the original script for this film was penned both by him and his screenwriter wife, Jung Seo-in. With their first go at filmmaking being a definite success, we can definitely look forward to their next project.