“We Wanted to Be a Voice for the Silent, a Light in the Dark, and Spread Hope to the Hopeless” – In Conversation with FYKE

The world has never been an easy place to live in and nowadays, more and more people struggle to endure, with the younger generation often feeling helpless and lost. Still; no matter how hard it might get, there is always a bright side to life – and for some, music is the answer; a ‘helping hand’, if you will, that dispels stress and suffering.

FYKE, a five-person band from California, is one of those groups whose music lifts up people’s spirits, touching the hearts of many. Consisting of Enik, Mikee, Steven, Justin and Gerard, the band has been gaining a lot of attention in its native USA and beyond. The reason that they attract various people is not only by mixing various music genres in their repertoire, but lies also in their honest-to-the-bone, relatable lyrics. FYKE often tackles the subjects of mental health, social issues and “dark human emotions”. Spreading positivity through their music is what the members have always desired to do, and for the past two years, they have done a great job as FYKE.

Since 2017, the band released a hefty amount of music, including their 2nd album Disorder which includes collaboration with artists such as Amber Liu of F(X), a South Korean K-Pop female idol group, James Lee and Vanness Wu. While sweeping the international listeners off their feet, FYKE recently accompanied James Lee and Kevin Woo on a few US tour stops, and their performances were well-received; it does not seem unlikely that FYKE will stand on a UK stage one day.

Just recently, we interviewed the members of FYKE and talked about their music, songwriting and how they strive to make their message known. 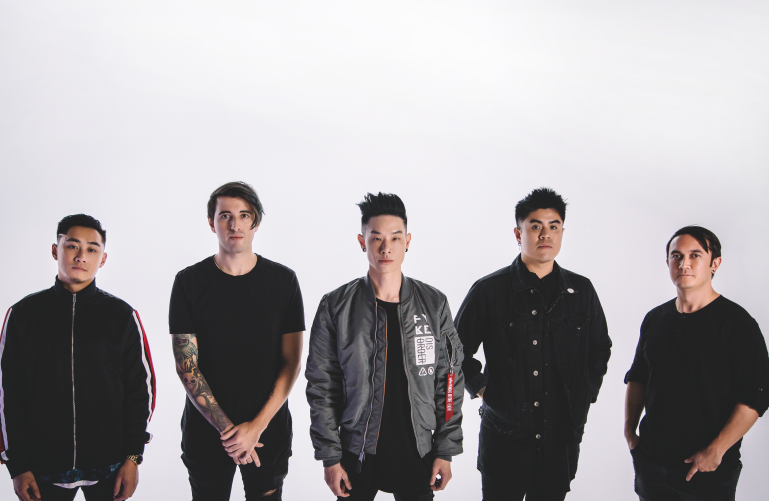 Prior to founding FYKE, you all belonged to different bands. What prompted you to get together and start a new group?

Enik: We wanted to use our talents for a greater purpose so we created the band as an instrument to spread a message of hope and address current social issues.

Mikee: Steven and I were actually in the same band prior to FYKE. He showed me a song (VICES), and when I heard the lyrics, and when Enik explained to me what the band was all about, I knew in my heart 110%  that this was something I wanted to be a part of.

How much did your lives change since you formed FYKE?

Gerard: I feel like I have a lot more purpose. It’s always been my dream to create a positive impact through music and I’m glad we’re on our way there.

Mikee: These dudes have really helped me out since I’ve joined the band. We kind of created this little community with each other where if one of us falls, someone’s always there to help pick them up. And I think that without that, my life would be totally different.

(Question for Enik) What kind of approach do you use to write your lyrics and how much input does the rest of the group have when it comes to writing and composing music?

Enik: Well, I come from a producer/songwriter background so my method of writing always starts and ends in the studio. It’s just easier for me to formulate ideas more coherently when I’m recording as I write. With that said, as I producer, my job has always been to get the most out of each band member while creating the perfect harmonial chemistry. Most people don’t realize that being in a band is not only like having a bunch of chefs in the kitchen; it’s also like having 5 chemicals that can create something amazing if you get the ingredient mixtures correct, but can blow up like an atomic bomb if there’s a slight miscalculation. So for FYKE, I take the lead and write a basic song and arrangement that is finished enough that it gives the rest of the band direction but empty enough that it still allows each member to contribute creatively. When it comes to lyrics, it’s just me. In that sense, the music is extremely personal.

Not long ago, you released your 2nd album called Disorder, what was the creative process behind the production of the album?

In March this year, you released a music video for Get Myself. You collaborated with Amber Liu from F(X), a well-known K-Pop group. How did you end up working with Amber, and what messages did you want to send to the audience with this particular song and video?

Mikee: Enik is a really good friend of Amber and they came up with this idea of a song [Get Myself] talking about why are we the way we are. Why do we like black so much? Or why am I so anti-social (not a Fyke song plug! haha). Just all these questions that people ask themselves. We just wanted to show people and let people know that at the end of the day, no one is perfect and that it’s okay to be yourself.

You recently toured with Kevin Woo, a former U-KISS’ singer, and James Lee, a former Royal Pirates’ bassist, how was it like to tour with them?

Enik: Well, I played in Royal Pirates with James for about a year so it felt natural to be on the road with him. Honestly, being on tour with Kevin and James was like hanging out with your best friends.

Mikee: It was so awesome being on the road with those dudes. It really felt like a big family field trip. Shout out to Subkulture Entertainment for taking care of us!

Your repertoire is full of songs with meaningful lyrics. Do you believe that your surroundings shaped you as a band in a creative sense and if so, in what way?

When you look at your careers as musicians, may it be playing the drums, the bass, the electric guitar or singing – what would you say are currently your main artistic challenges?

Mikee: Getting our music to be heard by the masses is one artistic challenge I feel like all musicians go through. There are so many great bands out there today that not a lot of people have heard about. So please support your local bands and tell a friend, or ten, about them!

There is a lot going on at the technical level of your music – how important are practice and instrumental techniques to you?

Mikee: I truly am a believer of “practice makes perfect.” I’m not saying we’re perfect, but I think there are so many great musicians out there that it just really pushes me to want to become better and better every day at what I do.

The music you play is a mix of various genres – does music that inspires you belong to the same genre or do you like to venture out when you switch the side from being performers to being the audience?

Mikee: I definitely love venturing out! Music is such a powerful thing. It really does bring people together. I think it’s so cool because I can believe that pineapple goes on a pizza (which it does) and even though you might not believe that’s true, but we like the same artist, we can get together for 45 minutes at a concert and agree on one thing and have a great time.

What’s the hardest thing about being in a band? As there are five members, there are also five different personalities. How do you make it work as a team?

Enik: Well, I touched on it in an earlier question but working with 5 creatives can be an extremely fragile thing. Together, we’re like one body and individually, we just need to play our parts for everything to work. I think the main thing that keeps us working together in harmony is being grounded in our beliefs and faith. We’re not doing this to become idols or mega rockstars. We know what our purpose is and we know what we’re called to do. Being grounded in our faith keeps us all on the same page.

Mikee: I think that having the same vision and belief that FYKE is far more greater than just us 5 guys definitely helps. Also, everything feels so natural in the sense that we all know our strengths, and where one of us lacks, another one can pick us up from that and we can drive forward. (Question for Enik) You are really active on Instagram and often connect with your fans via daily Q&A sessions; you give advice, support and you are also open about how you deal with your own life/struggles. What prompted you to do so?

Enik:  FYKE is more than a band. We wanted to be different and do something for our community. We wanted to be a voice for the silent, a light in the dark, and spread hope to the hopeless. Naturally, it just made sense that the most efficient way we knew how to spread that message was through music. However, at the end of the day, our music is just a tool. The “message” is what we’re really passionate about so it just made sense to use whatever things we had to keep spreading that message. Having attention on any platform is like having a global microphone. I just want to make sure that while people are still listening to us, we’re using that “microphone” properly and making the biggest impact possible.

When you’re not working, what do you do to get away from it all and relax?

Mikee: I try to hang out with my family as much as I can. I also love to cook! So if I’m not with my family, I am usually watching some kind of cooking show.

Mikee: I think whenever me, Steve and Enik get together to write, we go wherever the vibe takes us that day. I think the best songs that come are the ones where things just flow in the studio, and where we don’t have to force anything. So if that takes us to a certain style that we’ve never touched on, I think we’d be pretty open to that.

What next for you as a band? Do you have any new projects in the pipeline?

Mikee: We have a couple of things in the works right now. So stay tuned!

We’d like to thank FYKE who kindly took the time to answer our questions.