What makes music fans enthusiastic about K-pop? Is it the melody, talent or idols themselves? With several boy and girl groups debuting each month, it’s an arduous task for anyone to keep up with new acts on the market, nevertheless, one thing is certain, merely a handful of groups become successful. The Boyz have somewhat become a sensation overnight; with over a few million followers around the world, the eleven-member group struck their lucky dip in 2017 with their debut EP The First. After intensive training and preparation to perform live, the group embarked on an Asian tour in 2019 stopping in Japan, Hong Kong, Singapore, Indonesia, Thailand, Taiwan, and the Philippines; The Boyz were also welcomed in Europe, performing in cities such as Berlin, Paris, London, and Amsterdam.

The Boyz chose the O2 Forum in Kentish Town for their London show, the place where many notable artists like Bon Jovi, Coldplay, David Bowie, Lenny Kravitz and Nina Simone, to name but a few, have taken to the stage in previous years. Looking at The Boyz’ career so far, their powerful and flawless performances have proven that they might be one of K-pop’s main contender against the biggest names in the industry, including Super Junior, EXO or even BTS; perhaps that’s a far-fetched dream when it comes to BTS, but the future will show it sooner rather than later. 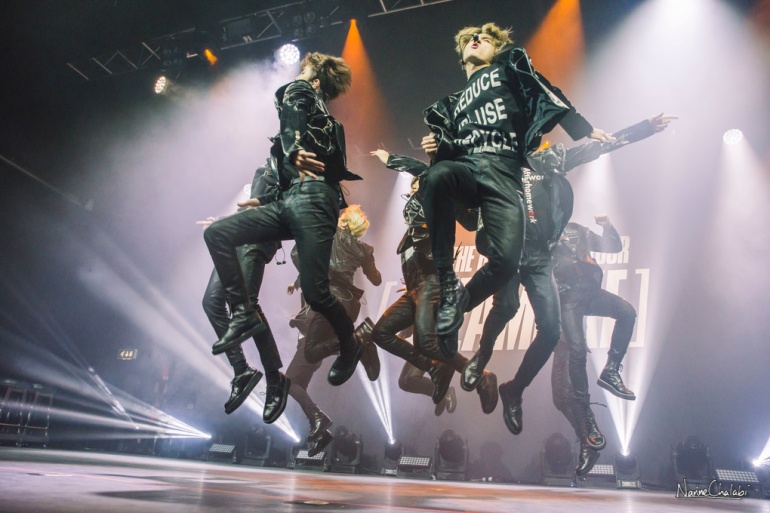 The Boyz came to London a week before Christmas, giving their fans an early present ‘in the shape of a powerful show’. On the night of the 18th of December, the group played 16 songs, including Boy from their 2017 first EP The First, No Air, D.D.D, Giddy Up, Text Me Back, not to mention BTS’s Fire. With their catchy music working its magic, their performance being radiant, and The Boyz’s charming personas on stage, there was no surprise that they were met with resounding love from their fans. The idols’ dedication to the performance, as two of the singers had injuries, only proved how passionate and committed they were to the show.

The eye-popping choreography was well executed considering that the stage had limited space for the eleven enthusiastic dancers. With The Boyz’s crowd-pleasing performance, you could not simply overlook their fast-motion miracle of kinetic energy. BTS’ cover was flawless and the faithful interpretation by The Boyz truly electrified the fans.

Being in a group of 11 always carries risks, as it can be hard to be synchronised and maintain well-arranged vocals. Even though The Boyz are competent dancers, there is still room for improvement. Despite a couple of rough notes with their execution, the young men owned the Forum that night; having delighted every section of the venue, the group left the stage exhausted but grateful. You do not have to be a K-pop fan to appreciate The Boyz, their personalities, devotion, and energy makes music fans eager to see them perform live again.

All Photos © Narine Chalabi for View of the Arts