In Conversation with Lee Sang-geun, Director of ‘Exit’

Lee Sang-geun began his career as a filmmaker in 1999 by making short films. In 2006, Lee was awarded Best Film at the Mise-en-scène Short Film Festival and, a year later, he received the Grand Prix at the Daegu Short Film Festival for Mr. Self-Portrait. In addition to directing, Lee worked as a production assistant on 2008 Dachimawa Lee directed by Ryoo Seung-wan (The Battleship Island, The Berlin File). During the production of the film, Ryoo, Lee and producer Kang Hae-jung realized that working together on a future project might be a good idea, as a result, Ryoo and Kang’s production company helped Lee to make his 2019 debut feature Exit, an action film about two anxious millennials trying to improvise and climb their way out of a life-or-death situation. The film became a huge commercial success in the domestic market and also opened last year’s London East Asia Film Festival in October during which, Lee Sang-geun greeted the UK audience at the screening.

We exclusively met with the filmmaker ahead of the film’s premiere and talked about Exit, his casting process and the work Lee had to put into his first feature.

Exit is a fun and action-packed film and it is your debut feature, what prompted you to make this film, and how long did it take to write the script itself?

The first draft of the script came in in 2013, but the idea was developed the year before, and in 2015 we went into pre-production. The whole production took about 7 to 8 years in total. It was a quite large budget film for a newcomer; it wasn’t easy, but the production and investment companies put trust in me and made it possible for me to make this film. I also wanted to show what the young generation goes through in Korean society, how much they might struggle with their own lives e.g. lack of a proper job and security.

You drew on a great cast in the film: Cho Jung-seok, Yoona, veteran actress Ko Du-shim and Park In-hwan, just to name a few. What was the casting process like? Did you write the script with those actors in mind?

When I was working on the script, I actually did think of Cho Jung-seok, he was my first choice. I was delighted when we were able to cast him. In the case of Yoona, I saw a different side of her in some TV shows she was on, and I thought it would be an interesting combination to put these together in the film. I had an ideal duo, a lead actress and actor, that was one of my first choices. Also, Park In-hwan and Ko Du-shim are notable actors that I wanted to work with. I was really happy with the casting.

The character of Yong-nam, after watching the film, somewhat stays in one’s memory. He is a self-appointed loser, a single and unemployed millennial, who compensates for his life with rock climbing, but after the disaster, he becomes some sort of hero. It’s interesting how you developed the character of Yong-nam within the 90-minutes of the film. How did you come up with this particular character?

The climbing sequences themselves are well-executed, how did you film and arrange those scenes?

I learnt how to climb properly for about 3 months and I also did a lot of research and experienced climbing first hand. The actors also practiced for several months as I wanted them to be authentic, such as posture, then the way they climb, etc. I really wanted them to know what they were doing, and that is reflected in the film. We obviously got a lot of help from the visual effects department and many scenes where shot on set, not on the location.

In Exit, you combined various film genres, from a family drama, action to a comedy. How did you manage to balance the three in the film?

I thought of what the balance should be or might be, even though when I was writing the script this was very important to me. The film itself mixed the aforementioned genres, but it also balances them. I just used particular genres in the right context of the scenes; I drew the line when it came to that and I decided not to cross that line. 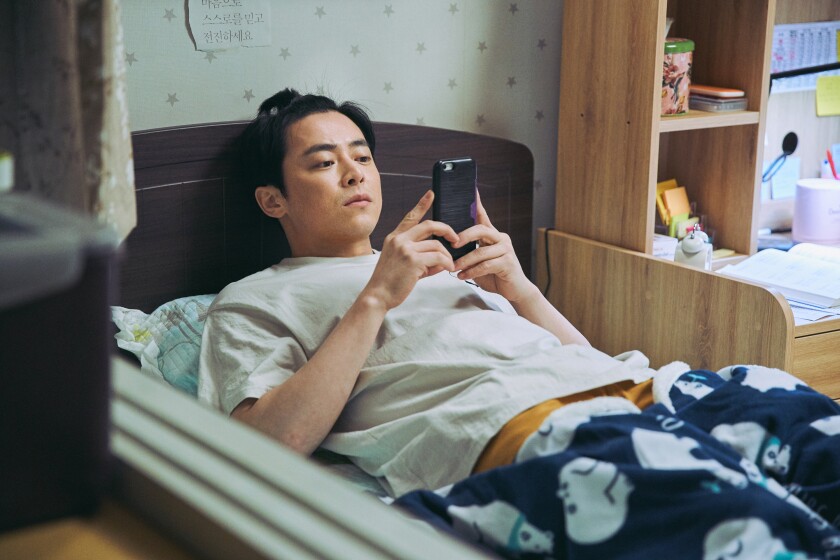 As mentioned before, the film consists of many well-established as well as new actors. How was it for you to work with all of them, and how much of artistic freedom did you give them during the filming?

As you said before, Exit is my debut feature, and most of the actors have been in the film industry for a long time and they have way more experience than I do. In many cases, they did come to me and suggested how they could convey certain scenes in the film, and we spent a lot of time talking to each other, we simply worked as a team. Sometimes, there were things we changed on the spot while filming or before the filming. I am sure this happens often on other people’s projects, but for this particular one, we all worked together. Actors did follow the script, but they were also given the freedom to interpret their scenes; it was all a team effort.

What was difficult for you to film during the production?

Everything was difficult [laughs]. I learnt that being a director is one of the most difficult jobs in the film industry. Prior to becoming a filmmaker, I was watching other people’s work, etc, but now that I took on the job of the director, I realised how complex it can be. I really gain more respect for the profession itself. It is also a very stressful work, and in all honesty, I have never had so much stress in a short period of time [laughs]. I experienced physical problems due to stress and anxiety while making the film, and for a moment, I thought to myself “I do not want to make another film again”. Also, movie-making is NOT a one-man job, it takes a lot of effort from many people. Even though the filming was difficult and at times exhausting, I had a great team that helped me with the production. And because the end result was good, I quickly forgot about the negative stuff that I experienced while making Exit.

After making Exit, is there a plan to make another feature soon? Where does your interest lie?

I really don’t know [laughs]. I would prefer not to do another action film; I have always been interested in genuine life stories, calm stories, stories about community life, etc. Films that many people could relate to. I also think the type of stories I like, are not typical ones that you would use in a mainstream film, I would easily fit into independent or art-house cinema. But if I was to make a film again, I would like to make one that contains drama in its narrative, something original, stories that are original for me. Time will tell [laughs].