Up amongst Seoul’s rollercoaster of a skyline, Yong-nam (Jo Jung-suk) and Eui-Ju (Lim Yoona) are hurdling from building to building desperately trying to outrun and outsmart the toxic fog slowly following them across the city. Opening up this year’s London East Asia Film Festival, Lee Sang-geun’s feature debut Exit is a joyful, lively but somewhat foreseeable take on the disaster movie. Yong-nam graduated from university several years back and has had a hard time finding employment ever since. His family think he’s a lazy slacker with nothing to show for himself, he gets mocked by the neighbourhood children and his hairstyle is still controlled by his fussing mother. One night in the middle of Seoul, Young-nam and his family are celebrating at his mother’s 70th birthday party. Just as they’re clearing up, news breaks that a deadly terrorist attack has struck the city. A van has parked somewhere nearby and started releasing mysterious toxic gas. If the gas touches you, it can kill you within minutes. The smoke starts to seep across the district, leaving Yong-nam and his family trapped and in grave danger.

Happening to work at the birthday party venue is an old crush of Yong-nam’s, Eui-ju. Yong-nam and Eui-ju became friends while attending the same rock-climbing group at university. While the rest of Yong-nam’s family manages to get saved by a helicopter, there’s not enough room for Yong-nam and Eui-ju and they’re left stranded to fend for themselves. Using their rock-climbing abilities, the duo bounce from roof to roof, swinging dangerously close to death in the hopes of finding rescue before it’s too late.

Exit is at times ridiculous and absurd with its gaping plot holes and far-fetched solutions – but that’s what makes it so fun. From a young woman dying from trying to take a selfie with the toxic gas to Yong-nam’s loud family bickering over karaoke to the saviour of the day being drones sourced over social media, Exit makes a mockery out of contemporary culture and the hurdles two underdog millennials have to go through. It’s certainly a film that know itself well and never tries to be anything more than a comedic and enjoyable disaster movie. Sometimes, this is great for the film. Its humour is consistent and its characters lovable – Lim and Jo have amazing and believable chemistry. However, this simplicity means that the storyline feels constricted and repetitive – constantly relaying back to the same tricks to try and hook its audience. There’s a fantastic scene in the first 40 minutes of the film, where Young-nam free climbs his way up a 20-something storey building while his family watch in horror. It’s terrifying, perfectly balancing elements of anticipation with comedy. Unfortunately, this seems to be the height of what the film can offer in terms of suspense – after this, every shocking moment feels a bit lacklustre in comparison. Because of this, Exit is a film that always leaves you wanting slightly more. Slightly more to lose, more to risk, and more development on this mysterious fog and the terrorists behind it. 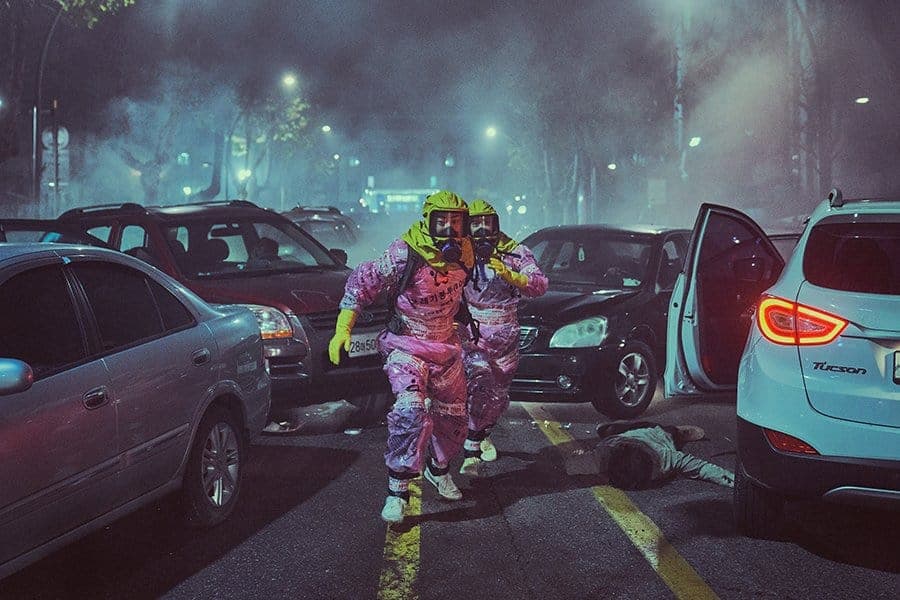 Lee Sang-geun has an astute way of handling wit and talent in being able to keep comedic timing consistent and refreshing. If you take Exit for what it is, a joyful story of two anxious millennials trying to improvise and climb their way out of a life-or-death situation, then it’s a great and pleasant watch. However, if you’re seeking a thrilling, hair-raising run-for-your-life disaster film – you might be out of luck. Although incredibly charming, Exit’s trajectory is predictable and a little too carefully planned to deliver the shock it promises.