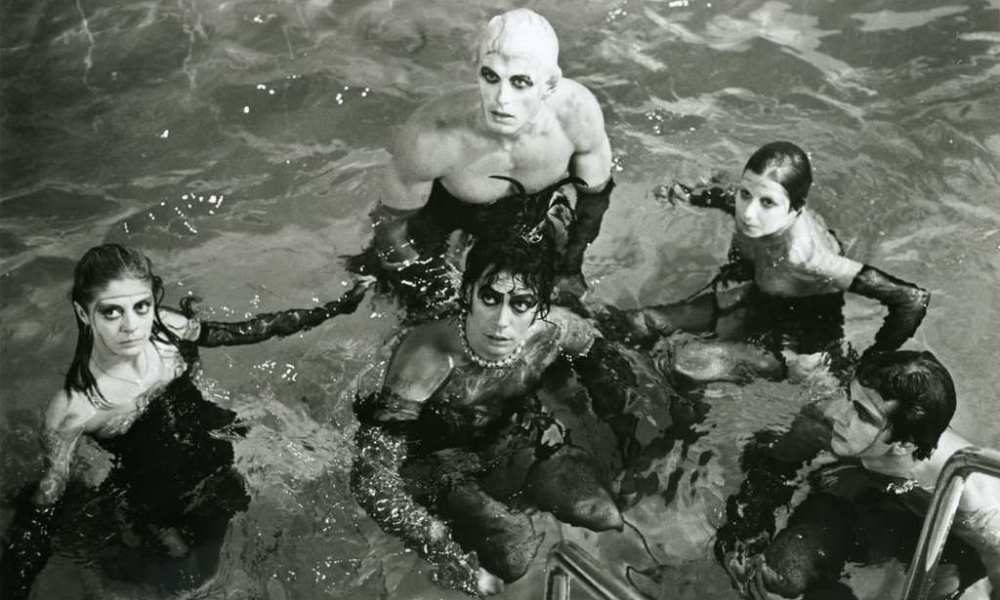 Give Yourself Over to Absolute Pleasure – The Significance of ‘Don’t Dream it, Be it’ in The Rocky Horror Picture Show

When you think of Jim Sharman’s The Rocky Horror Picture Show, the first scenes that probably come to mind are that of the iconic time warp sequence, Tim Curry crooning ‘A Sweet Transvestite’ at the Annual Transylvania Convention, Rocky himself being unveiled in all his glory in Frank-N-Furter’s laboratory, or even a loved-up Brad pleading for Janet to marry him. Celebrating its 45th anniversary earlier this month, The Rocky Horror Picture Show is a cult classic full of memorable moments, toe-tapping hits and irresistible one-liners. Go to any Rocky Horror screening and you’ll find a mob of superfans dressed up in corsets, fishnets and feather boas ready to sing along word-for-word. Holding the record for the longest theatrical release in cinema history, Rocky Horror is one of the most profitable movie musicals of all time. Its songs are recognisable staples you’ll find on any wedding dancefloor, at any Halloween party, and on any Spotify musical megamix. Yet still, for every jump to the left and every step to the right there’s some musical numbers – whilst adored by fans – that remain criminally underrated and unreferenced by popular culture.

One of these numbers is Fanfare/Don’t Dream It sung by Tim Curry as Dr. Frank-N-Furter roughly 1 hour and 20 minutes into Rocky Horror’s 1 hour 40 runtime. Structurally, Rocky Horror is a film that packs a lot of its most beloved (and reflected upon) moments in its first 45 minutes. The first half of the film is filled with ecstatic and adored tracks such as Damnit Janet, The Time Warp, Sweet Transvestite and Hot Patootie/Bless My Soul; while the film’s closing half hour dwells on slower, more obscure ballads such as ‘Don’t Dream It,’ ‘I’m Going Home,’ and ‘Superheroes’ to reflect the film’s cryptic trajectory. Of course, the film’s finale is still sprinkled with energetic numbers such as ‘Rose Tint My World’ and ‘Wild and Untamed Thing’ to keep things lively but there’s a definite shift as the film’s tone turns more sinister and reflective.

To recap for anyone who hasn’t (yet) enjoyed the spectacular The Rocky Horror Picture Show, it’s a story of a young newly engaged couple Brad (Barry Bostwick) and Janet (Susan Sarandon) whose car breaks down in the middle of the woods one stormy night. Looking for a phone to call for help, they find themselves at the mansion of Dr. Frank-N-Furter (Tim Curry) a frenzied scientist who’s hosting a party to reveal his latest project; a Frankenstein’s-monster-like creation named Rocky (Peter Hinwood). As the night unfolds, madness ensues as Brad and Janet get whipped up into a whirlwind of murder, sex, and alien invaders from the planet Transylvania.

Standing on steps below an image of the famous RKO transmission tower, Frank-N-Furter nostalgically recites his idolisation of 1933 King Kong star – Fay Wray – “That delicate, satin-draped frame…as it clung to her thigh, how I started to cry ‘cause I wanted to be dressed just the same” he whimsically sighs. Explaining a yearning desire to adopt the feminine and the beautiful, Frank-N-Furter expresses his fascination with human performances of gender as an alien outsider. With a kick of his stilettos he knocks a lever, unfolding a staircase down into an eerie mist. “Swim the warm waters of sins of the flesh. Erotica, madness, beyond any measure” he coos while descending the steps – it’s sensual, it’s mesmerising and it’s a felicitous display of all the principles that Frank-N-Furter (and consequently, everyone in his mansion) lives by.

Plunging through the mist whilst harps sing, Frank-N-Furter dives into a hidden pool. As the fog clears, he floats, singing to the heavens ‘don’t dream it, be it’ – another ethos of Frank-N-Furter’s mansion. A haven to indulge in repressions, hidden desires, and forgotten dreams. But Frank-N-Furter’s mansion goes further than that – it’s not intended to be a weekend getaway that you can toss away and forget so you can return to a 9-5 life of banality. It’s a lifestyle change, a commitment to accepting and living the life that the outside world feels is so odd. ‘Don’t dream it, be it’ is a surrender to your own outrageous fantasy and ambition. As Frank-N-Furter floats singing, at the bottom of the pool is painted Michelangelo’s ‘The Creation of Adam’; a reflection of Frank-N-Furter’s fulfilment of his own ambitions as he himself plays God with Rocky.

Hearkening to Frank-N-Furter’s calls, Brad, Janet, Rocky and Columbia (Nell Campbell) all march towards the pool; angelically echoing a chorus of ‘don’t dream it, be it’. This is the point in the narrative where Brad and Janet are finally not actively attempting to escape the mansion or expressing doubt about Frank-N-Furter. They have renounced all attempts at fitting in with the normality and monogamy of mainstream society and instead start to follow Frank-N-Furter’s orders to ‘give yourself over to absolute pleasure.’ If the first hour of the film is Brad and Janet’s excitement and anxiety of exploring Frank-N-Furter’s hedonistic universe; the last 40 minutes or so showcase their coming to terms with, indulging in and embracing of their own sexualities. As Frank-N-Furter floats in his Gatsby-esque pool, they swarm to him in a rush of adoration and lust. They have finally become fully emerged into his world.

As the five of them circle in the pool, swapping kisses and continuing to chant ‘don’t dream, be it’, violins swoon in the background and an aura of eventual calmness starts to take over the scene. It’s the first time these characters aren’t holding hostility towards each other – Columbia has forgiven Frank-N-Furter about Eddie, and Brad and Janet are no longer casting judgement on the others. Unfortunately, this euphoric and magical moment of the film is short-lived. After the group quickly transition into performing the fast-paced and lightening ‘Wild and Untamed Thing,’ their fun is stopped by the entrance of Riff Raff and Magenta – who enter promising to kill Frank-N-Furter. Before his untimely murder, Frank-N-Furter performs the haunting ‘I’m Going Home’ – a tragic and beautiful send off as he says his last goodbyes to Earth.

With this, Don’t Dream It is one of the last unadulterated moments of joy and pleasure in the film – as well as one of the few moments of transcending calmness and relief. Don’t dream it, be it sums up exactly why Rocky Horror has remained so entrancing to audiences for 45 years. It dares audiences to endeavour on their wildest dreams and live their genuine selves – no matter how frowned upon that may be. It’s an urgent and comforting proclamation for the masses to embrace their sexuality, embrace experimenting with gender expression, embrace their weirdness and let go of what is coded as ‘normal’ to live a life of authenticity. As Janet puts it – ‘God bless Lili St. Cyr.’