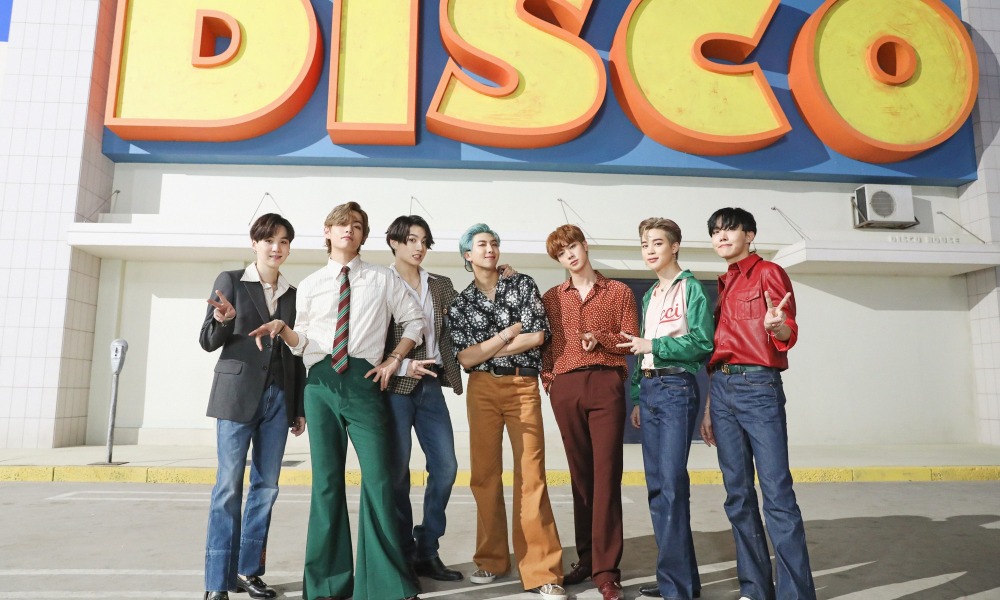 Dancing the Night Away: Review of BTS’ ‘Dynamite’

“With the past, I have nothing to do; nor with the future. I live now” – Art Buchwald.

Dynamite is BTS’ first English language single since their collaboration with Steve Aoki for Waste it On Me (25th October 2018). The surprise release of the single was announced on 2nd August and accompanied by a countdown timer to amp up the anticipation for its release on 21st August 2020. The song is written by David Stewart and Jessica Agombar, London based songwriters and producers, who form two thirds of collective “Mad Teeth” and were recently involved in co-writing the Jonas Brother’s smash hit What a Man’s Gotta Do (2020). Unusually BTS choose not to rewrite the lyrics, but decided to record the song in English, keeping it more or less as it was in the demo version.

Generically Dynamite fits within the category of disco-pop, and sonically is reminiscent of Disco’s halcyon days in the 1970s inflected with a dash of 1980s and 1990s dance music. It is important to note that disco originally emerged from black and queer cultures, particularly associated with women of colour and gay men, and is thus can be understood as resistant and oppositional in its early days. It is also worth remembering that the 1970s was the height of the feminist, civil rights and black power movements. Disco is also the apex of camp, embracing and luxuriating in its queer aesthetics. The emergent New Right saw this as a challenge to the patriarchal straight white male dominance of the US music industry and founded the anti-disco movement. This conservative reactionary backlash against disco is exemplified when on 12th July 1979, during the break in a White Sox doubleheader with Detroit Tigers, at Chicago’s Comiskey Park, DJ Steve Dahl, a heavy rock enthusiast, exploded over 40,000 disco records some of which had been brought in by fans to the game for this symbolic destruction of popular music. The records were placed in a crate on the playing field and blown up to chants of “disco sucks”. Colloquially known as “disco demolition”, this event did not signal the end of disco but rather accelerated the birth of house music via post disco music several years later.

In these terms while Dynamite seems merely to be a feel good postmodern disco imbued dance track, the title of the song can be interpreted as an explicit reference to the “night that disco died” to give it the subtitle of Steve Dahl’s 2016 book, Disco Demolition: The Night Disco Died (co-written with Dave Hoekstra). At a time of uncertainty and in the face of a global pandemic, Dynamite evokes both nostalgia for the idealized past (bearing in mind that the late 1970s and 1980s saw repressive right wing governments erode the rights of its citizens in the UK and US) while at the same time being an exuberant expression of presentness in the face of an unknowable future. Perhaps most reminiscent of BTS’ 고민보다 Go (Go Go, 2017), a celebration of youth and living without being burdened by the future, it is easy to see why BTS decided to take a chance on Dynamite concerned as it is with the present moment. For cultural scholar Frederic Jameson, postmodernity is marked by a crisis in historicity and can be found in popular culture through the cannibalization of past styles and forms becoming pop history in the process (1991).

Dynamite presents us with music history as bricolage, sonically and visually in the music video, drawing on music history, both pre and post disco. A dizzying array of popular culture artefacts are referenced: The Rolling Stones and LeBron James in the lyrics, Michael Jackson, Elvis Presley and John Travolta in the accompanying visuals in the music video. Americana is ever present mainly constructed architecturally in the spaces – the diner, the donut shop and the CGI disco hall – evoking 1950s small town America. The pastel colours and retro fashion communicate a sense of tranquility in an imaginary space without a past or future, while the playful choreography, which as with the song ‘borrows’ from past musical styles, entices us – even those with a lack of rhythm – to the dancefloor. At the same time elements of funk through the interlocking grooves and strong rhythmic bass, hint at the African American origins of disco before disco was mainstreamed in 1977 with the release of Saturday Night Fever which situated disco within heteronormative whiteness with John Travolta as its poster boy.

Dynamite communicates BTS’ positivity and message of healing energy at a time of global crisis where the future is unknowable and being present is perhaps the only way to negotiate such uncertainty. Covid-19 has flung us into a simulacra of a dystopic science fiction film, where reality has outstripped fiction, and enforced isolation has transformed our lives, making our connections with people and community virtual rather than real (for those of us who are privileged to have access to technology). V’s verse stresses the communal ethos of the song: “Bring a friend, join the crowd, whoever wanna come along / Word up, talk the talk, just move like we off the wall / Day or night, the sky’s alight, so we dance to the break of dawn / Ladies and gentlemen, I got the medicine so you should keep ya eyes on the ball, huh”. Here our desire for community is foregrounded as is music’s potential for healing through its presentness. Some of the lyrics were changed in order to adapt to the song to BTS whose authenticity and sincerity is a significant component of their global success (David Townsend, Interview with Rolling Stone Magazine, 26th August 2020). Jungkook’s opening verse may have undergone some changes especially the first line given his well-known love of milk: “Shoes on, get up in the morn / Cup of milk, let’s rock and roll”. Certainly back in the 1980s, it was a glass of babycham rather than milk which was the drink of choice (although a glass of milk was said to line the stomach and protect against a hangover).

While many fans might have been worried about BTS releasing an English language single in that it might seem as acceding to white western imperialism, it is impossible to imagine Dynamite in any other language than English. It is no surprise that BTS having heard the demo decided to keep the song as it was rather than translate it into Korean. Big Hit Entertainment’s Learn Korean with BTS initiative acknowledges the fact that BTS is first and foremost a Korean group, while the single works within the multilingualism that is a key component of the K-pop industry.

Dynamite is the antithesis of BTS’ earlier gothic imbued single releases: Black Swan and ON. It might lack their lyrical depth, but it more than makes up for it with lots of glitter and sparkle that is impossible to resist. And it keeps BTS’ languid and fluid performative masculinity which captures the early “queer” days of Disco. The song’s key change which is accompanied in the music video by explosions of the colours of the rainbow, painting the background and framing the members, eschews the heteronormative script used by other K-pop groups crossing over to the West. Early disco reveled in its queerness. Its oppositional politics opened up a metaphorical and literal space up for marginalised communities to inhabit thus constructing a resistant space of non-conformity and radical sociality. If its primary objective is communicate and produce happiness in the listener / viewer, its secondary objective has a political edge that is commensurate with the present time.