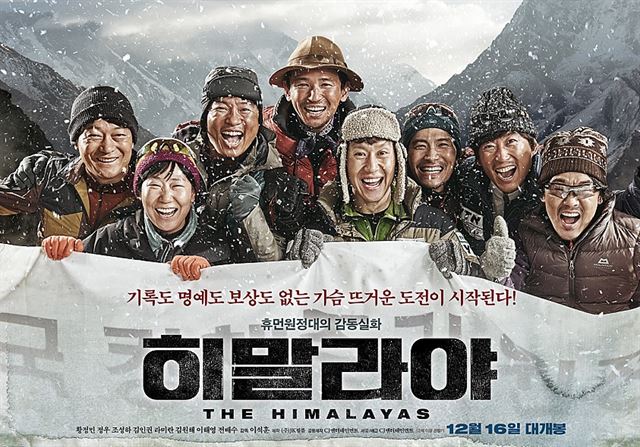 Someone once said that “There is something about the Himalayas not possessed by the Alps, something unseen and unknown, a charm that pervades every hour spent among them, a mystery intriguing and disturbing. Confronted by them, a man loses his grasp of ordinary things, perceiving himself as immortal, an entity capable of outdistancing all changes, all decay, all life, all death.” I reckon that is what all the mountaineers think when they climb the most comely mountains of the world. Um Hong-gil is among them; and also the most accomplished high-altitude mountaineer in Asia. Along with his team, he completed several missions to reach 14 peaks with altitudes above 8,000 meters; and he continues to climb. His latest recorded expedition took place in December 2007, when he successfully reached the summit of Vinson Massif (4,892 m) in Antarctica. In 2015, Lee Seok-hoon, a South Korean filmmaker, released a new film – The Himalayas – which depicts Um’s life; the film director particularity focused on Hong-gil’s (Hwang Jung-min) mentoring of two climbers: Moo-taek (Jung Woo) and Jeon-bok (Kim In-kwon) – who later lost their fight against the murderous Mount Everest. It is also a story about the unusual bromance between Moo-taek and Hong-gil.

Nepal, 1992. After completing a mission, Hong-gil and his team repose in a village; while enjoying their time with the locals, they receive a distress call from another Korean team that got stuck in the mountains. In the middle of the night, the team decides to rescue the fellow climbers; Hong-gil is acquainted with the inexperienced group that includes Moo-taek. They help them descend; however, afterwards, Um leaves them with harsh words: “give up climbing if you want to live much longer.”

Years pass by, and Hong-gil is ready for yet another adventure in the Himalayas; unexpectedly, Moo-taek and his friend Jeon-bok show up at his house, begging to join the team and the new expedition. Howbeit, before they become members of the crew, they are required to undergo a proper training. After months of hard work, and thanks to their own resolve, both men are transformed into strong mountaineers; finally, they gear up and get ready to travel to Kanchenjunga – the second highest peak of the Himalayas after Mount Everest.  During their climb, the crew gets into trouble; Hong-gil asks his friends to leave for camp and decides to tackle the peak on his own; nevertheless, Moo-taek doesn’t allow him to leave by himself and follows Hong-gil. After a complex and risky ascent, they manage to reach Kanchenjunga. The long journey bonds the two men and pushes them to achieve further results in climbing. Unfortunately, Hong-gil – after years of climbing – has to retire due to a leg injury, while Moo-taek becomes an experienced mountain guide for the Himalayas enthusiasts and happily travels to Nepal and India.

The film quickly pushes through the time capsule and the audience is taken to May 2004, with Moo-taek stranded in the Mount Everest’s ‘Dead Zone’ (also called ‘The Open Graveyard’). After hours, spent in severe weather conditions – where the cold wind can drive the temperature down to -70 °C – Moo-taek is finally found by his dearest friend Park; alas, he already suffers from unbearable frost bites and is not able to move, and Park is forced to leave him – only to be later consumed by the mountain himself (his body has never been found). From this point onward, the story revolves around Hong-gil and his attempt to retrieve Moo-taek’s body – annoyingly, the film at this point changes its pace drastically and becomes an unimpressive melodrama.

One of the writers about the experience wrote that “no study has ever been done on the causes of death on Everest, what it is that makes people sit down and give up sometimes within shouting distance of safety. But climbers refer to a kind of confrontation with fear that they experience at a certain point up the mountain. It is a kind of a realization that not only will you not be able to help anyone else in trouble, but if you mess up in any way, no one will likely be able to help you either.” And this what Moo-taek might have felt when he was left forsaken on Mount Everest.

There are various films about the Himalayas out there – some excellent, and some dreadful. Lee’s The Himalayas feels like it is a film that entirely focuses on hope, unity and friendship rather than on serious mountaineering. There are too many cliché moments and were it not for the Korean cast and language, I would have thought that I was watching Everest (2015); that said, The Himalayas is less deceptive.

Most of us know that Mount Everest is a cruel mountain which pushes climbers to their physical limit, but the film doesn’t convey it well enough; of course, there are visibly frozen and exhausted faces; there are also tons of snow, the CGI Himalayas and the vile wind; however, all of these totally deplete the narrative – instead of concentrating on the story, I was admiring the cinematography quite often. The (at times) over-theatrical performances from Hwang Jung-min and Jung Woo certainly showed that the two protagonists were incorrigible climbers. There is also a lack of tension in the movie; a few tears here and there didn’t make the production dramatic enough either. It was like watching an adventure melodrama, but given the setting, it lacked a proper adrenaline rush that some other Himalaya-themed films delivered. Lee’s numerous characters – particularly Hong-gil’s team – are drawn as “present-day comedians” rather than sincere mountaineers; still, they are depicted as  a likable bunch of people. The cinematography by Seung-hyuk Hong and Tae-Sung Kim is worth a mention; it is hard to say how much of it was CGI, but is was neatly done, and accompanied by spotless editing from Ode to My Father‘s (2014) editor Jin Lee. Furthermore, the beautiful score by the well-known composer Sang-joon Hwang (A Violent Prosecutor, Pirates, Private Eye) adds a great note to the film. In my opinion, these three factors have – to a limited degree – saved Lee’s film from being a disaster. Nevertheless, The Himalayas was a flop in the Western film critics’ eyes.

How did the film manage to earn more money than Star Wars in Korea? I do not know that, but I wish I knew the reason behind The Himalayas‘ Korean success. Frankly, the film looks impressive on the big screen but that’s about it; nothing more, nothing less. It is still better to stick to the documentaries rather than seeing the overstated adventure productions about the majestic Himalayas.