“City of stars – Are you shining just for me?”

There are two main artistic centres in the once “promised” land of USA; we could say that one is the city of dreams, while the other is the city of stars – and in both, you probably have to be at least a bit “la la” to survive. In New York, New York, dreams are within an arm’s reach for the musicians and dancers and Broadway chasers, while Los Angeles – LA, LA – feeds the connection between the glamorous ghosts of the film industry’s past and the hopefuls who chase similar dreams and fame in the present – and it is this LA LA Land that serves as a background of this obvious homage to the 1950’s, when the screen was not only silver, but gold.

It is on the metaphorically (and realistically) crowded LA highway ramp of today that the opening number takes place – “Another Day of Sun”, immediately setting the tone of the musical dramedy by dipping the audience straight into the youthful sea of everyone-is-pretty-here, everyone-is-chasing-dreams, with brightly coloured outfits that clearly bring about that 1950’s feel. That is also where the main couple of the show, Sebastian (Ryan Gosling) gets road-raged with Mia (Emma Stone), an aspiring actress who is practising her audition lines in the car, upon their very first meet-annoyed (the cute follows later). Their second encounter is more magnetic, but no less angry – Mia is drawn into a bar by Sebastian’s music, only to witnesses Sebastian getting fired by the manager of the restaurant (thumbs up for the JK Simmons cameo in a Whiplash-opposite character) – she tries to talk to Sebastian, but he angrily storms out. 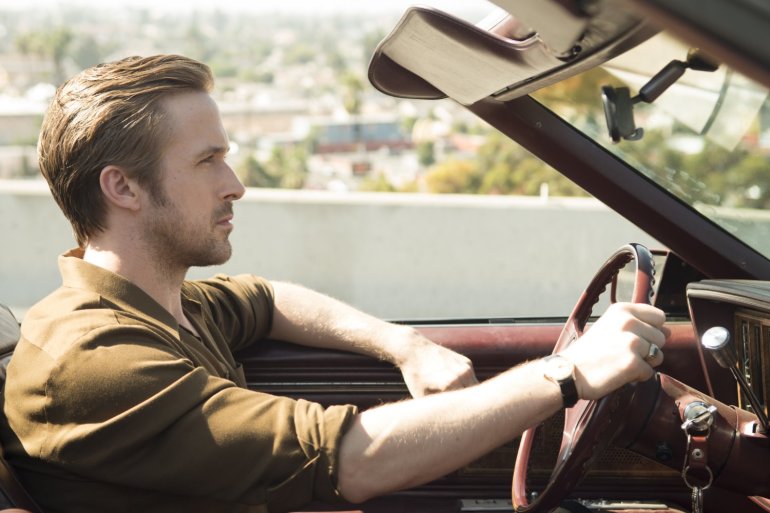 Their third encounter, months later, has a completely different vibe – Mia wittily gets her revenge on ‘Seb’ at a pool party where he is performing as a part of a cover band. Sparks fly, and a “Singin’ in the Rain”-like number “A Lovely Night” later, Seb finds himself drawn to Mia enough to actively seek her out, visiting her at her movie lot coffee shop workplace, and the two – who seem to be similarly lost while searching for the best path to their dreams and who have witnessed each other’s vulnerable moments, start falling in love – until the downs and especially the ups start getting in the way of their love. Will they keep their dreams and their love alive in the “City of Stars”?

La La Land has so far slayed at the Golden Globes – the film even set a record (7) for most Golden Globes won by a single film. It has a leading number of BAFTA nominations (11), and there will be no surprise when tomorrow’s list of Academy Award nominations names La La Land in (probably) all categories that it qualifies for (categories like Best Foreign Language and Best Animated Feature nominations would probably be a bit of a stretch). The audiences (mostly) love the film. The critics love the film. What makes La La Land so special? 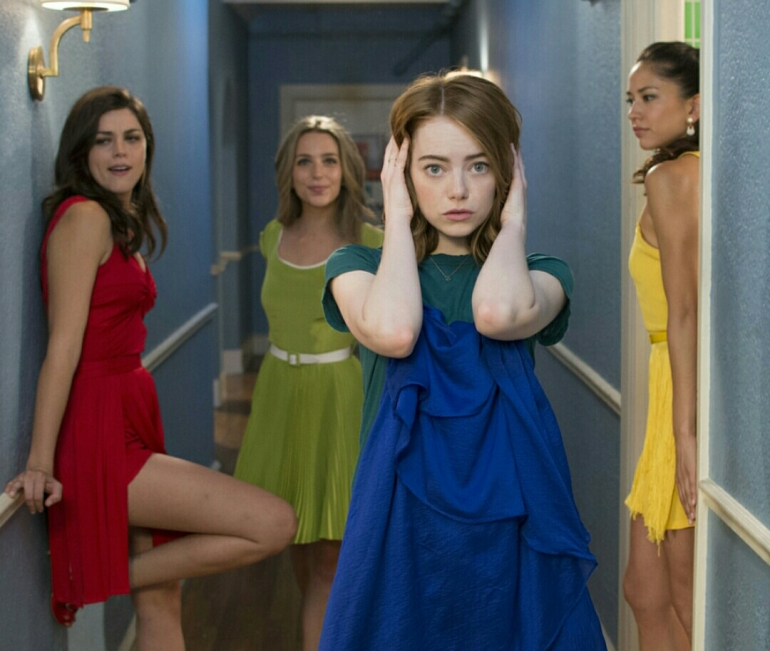 It is most definitely not originality. The story is one we have heard a million times before – boy meets girl, they chase dreams, they love, they struggle, etc. The musical numbers all have a ring of familiarity – they are original, yes, but with roots and harmonies that are anything but new – they worm into our ears and put themselves on repeat as if we’ve heard them a thousand times before. And that, I believe, is exactly it. The familiarity of it. The screenplay that is full of charm that seems to belong to a world we lost but somehow still remember, or we fell in love with while watching old movies. The world where politics and crime and reality TV stars were not as important as the stories of dream-chasing and success and glamour. Where there (at least on the surface), the world held more purity, and humanity; where vulnerability was something that was allowed to exist without rabid humans pouncing on it immediately. And this is exactly what La La Land evokes in the viewers – with its old-school balance between the tough, guarded, deliberate masculine and the dreamy, witty, emotionally raw feminine, both coated (even if they refuse to show it) in their humanity and vulnerability, where that “Someone in the Crowd” finds another, and these “Two Fools Who Dream” eventually successfully make their dreams come true, even if they (slight spoiler ahead!) face the Casablanca-like fate.

Speaking of the main characters, Emma Stone did a great job in the role of Mia – she basically channelled her usual charming and witty self in the happy-go-lucky parts of the film, but she really hit home when the emotions and fading hope struck her character raw – she acted out each nuance beautifully. Ryan Gosling also made for the perfect Sebastian – his oozing charm actually covered his somewhat average singing abilities (I heard his other performances and I stand by what I’m saying), but he otherwise pulled a Gene Kelly – acting, singing, dancing, and even learning to play jazz piano just for this role. To be fair, the singing and dancing of both Stone and Gosling was more on the average side and not at the level of the musical stars of old (especially the tap dancing was very basic), but that just made their characters more human.

While highly rated, it has to be said that La La Land is not without fault; besides its lack of originality, this includes a mild-to-medium case of white-washing and quite stereotypical gender roles (a consequence of tapping into the 1950’s?), and don’t even get me started on the whole “true jazz” plotline: that one is downright hipster. But that good ole’ feeling washes most of it away.

Damien Chazelle seems to be intent on bringing us all kinds of music-imbued film productions and he is excelling at it from the box office point of view, delivering two major hits before he even turned 32. Following up on his phenomenal Whiplash (2014 – his best work so far, shout if you agree!), he left his darker tendencies behind for La La Land, and created this callback to the outwardly pure, golden age of cinema and some of the world’s most beloved cinematic musicals, proving that there is a market for that kind of film – the kind that is not sardonic, nihilistic, pushing past the limits of good taste or earning its income by the steaminess of its scenes. Just like the musicals of the past, “La La Land” is dreamy, dreamily vulnerable, with gently realistic moments. It is a cinematic Band-Aid that we can put on our knees that have been bleeding from all the horrible reality and horrible films that have been giving us nightmares. It truly excels at being a feel-good movie; don’t miss it, dreamers!