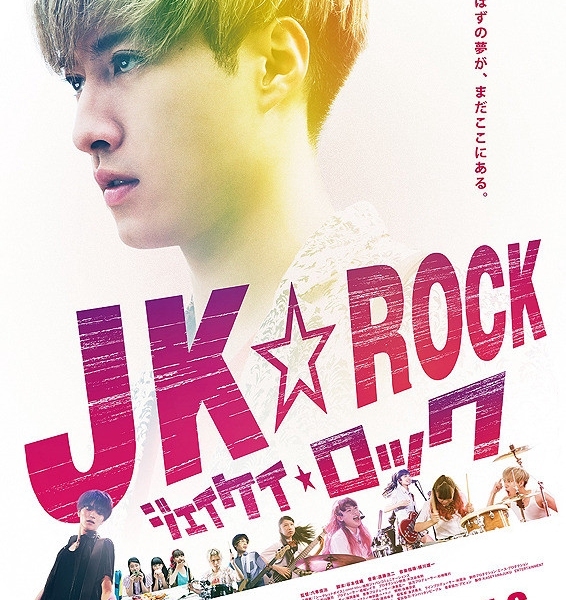 In the colorful world of Japanese manga live-action adaptations and musical-themed film productions, we can find a series of films that center around pop- and rock-bands that practically ooze ‘ikemen’ (good looking men) by the seams, while there is an (un)surprising lack of such films centering on female music groups. The reason for that lies in the audience – teenage girls are continuously catered with what they presumably want and are used to getting – ikemen – when they sit down do watch this type of movie.

This concept was cleverly used by Japanese director Shunji Muguruma, who has been working on youth-oriented productions for all of his career. He wanted to produce a musical dramedy that would imbue the audience with the need to reclaim that ole’ rock spirit – especially Japanese teenage girls. To do that, he started the movie with a popular male rock band with the prescribed ikemen in the attendance, but had the band promptly fall apart, making way for a newly formed girl rock band to come to the fore of the story.

JoKers were a popular rock band until they suddenly broke up, leaving one of the two key members, Jyo Kodukai (Ryosuke Yamamoto), famous as a solo artist, working abroad, and the other, Jyo Kaieda (Shodai Fukuyama), resigned to a ‘normal’ life of a university student. The new situation does not lie well with the remaining two members of JoKers, Harunobu Syoji (Ryota Kobayashi) and Subaru Jinbo (Kaito Kumagai), who feel sad that Jyo Kaieda gave up on music and want to make music with him again. To do that, the two turn to their mutual friend, a rock cafe owner Teruo (Masahiko Nishimura), who comes up with a plan: to reawaken Jyo’s rock spirit, he will get Jyo to tutor a beginner rock band Drop Doll that Teruo puts together on the spot; he recruits three female high school students: Sakura (Chihiro Hayama), Mao (Yuina) and Rina (Yukino Miyake). Jyo falls for the bait and starts training the girls in a manner that would make Whiplash’s music instructor Terence Fletcher proud, which makes him and the forceful, proud Sakura clash several times, but at the same time, functions as a defibrillator on Jyo’s stagnant rock heart… 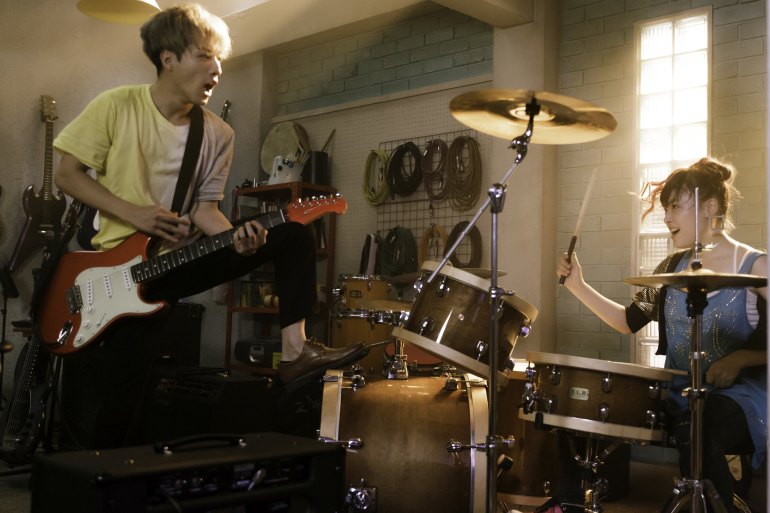 The film features several tropes that could have been avoided – especially romance feels oddly redundant, despite this being a teen flick and even though it is not as in forefront as it could have been; also, the chemistry between both Jyo’s feels stronger than the romantic link that Jyo and Sakura share, may that be intentional or not – if there is ever a sequel, a BL line would slide in there with a butter-less ease. Some of the other elements, used in the film, correspond to those in sports dramas, which is were Shunji Muguruma got the idea for the script (even though the script itself was later written by a female writer, to ensure the female perspective is catered to the full). He previously worked on a sports drama Ace (2004); he took the dynamic between a strict coach and his pupil and transferred it into the world of teen rock. This also explains why while the script itself is original, the mood and the colouring of the film are all very much manga-like – all very much intentional on the director’s part. Also, speaking in manga-world terms: a special shout-out goes to the over-the-top-but-so-much-fun purple Lamborghini; as far as props go, it’s rare that one turns into a proper scene-stealer, but this one made the A grade.

Fun, ultimately, is what JK Rock is all about. May it be the comedic shticks or the truly decent music score/soundtrack, realistic jam sessions, the vivid colouring or the energy of the cast, it all comes together in a vitamin Rock injection that makes a viewer want to stand up and join a rock band, stat – and there is no doubt that some of the teen viewers might do just that. After all, even the cast itself was inspired by the project to the point where Drop Doll, formed of original cast members, is now an actual, performing rock band.