Zombie film is a “genre that just won’t die,” someone once said. It all started in the early thirties when Hollywood was beginning to try out “iconic-monster” films, and within a short period of time, the first feature-length “walking-dead” movie was presented to the audience: director Victor Halperin’s inexpensively made White Zombie (1932). Since then,  zombie productions have been popping out of the U.S and European countries like hot buns on Saturday morning. However, when George A. Romero debuted his horror feature Night of the Leaving Dead (1968), he brought something new into the genre; his undead creatures were flesh-eating, brainless and indiscriminate fiends, who crawled grandly out of their crypts to attack the venerable and infect them with zombie bites. Romero has influenced many filmmakers since 1960s, and helped create a new kind of zombie film for the 21st century; for instance, 28 Days Later… (2002) and 28 Weeks Later (2007) are films about “infected zombies unleashed as a biological virus” – same goes for the six Resident Evil films (2002, 2004, 2007, 2010, 2012 and 2017). Also the U.S TV has created an incredibly engaging zombie show, The Walking Dead, which has been running for years. On the other hand, the Asian film market has never produced a good quality film about the undead; most of the time, they were sadly pitiful: Versus (2000), Dead Sands (2013) and Run (2013) – to name just a few. However, in 2016, Yeon Sang-ho (The King of Pigs, The Satellite Girl and Milk Cow, Seonsan) – a well known South Korean filmmaker – presented his first live-action film: Train to Busan. 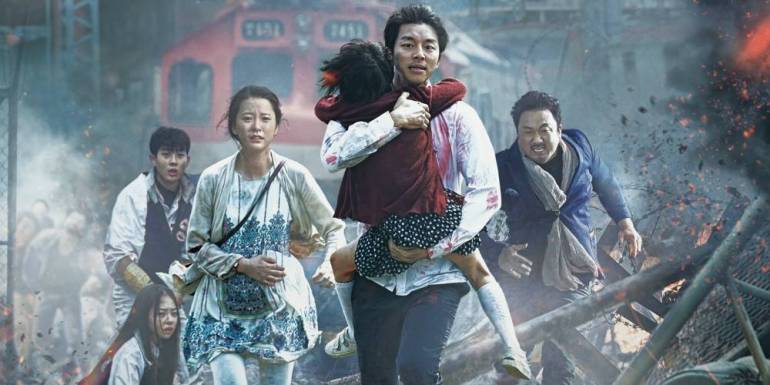 Seok-woo (Gong Yoo), a fund manager – a bloodsucker, some might say – is a divorced man whose work has taken over his life. He focuses on his job so much that he also started to neglect his young daughter Soo-an (Kim Su-an: an amazingly believable performance). On the day of Soo-an’s birthday, he comes to a decision that she ought to visit her mother in Busan; they hop on board of KTX and off they travel to the city. At first, nothing indicates that it might become ‘an exciting’ train ride until the last passenger jumps onto the train – a girl with a weird bite on her leg mumbling “I am sorry, I am sorry”. The pace of the film quickly picks up on its speed; the girl suddenly turns into an undead and attacks the first person she comes in touch with; the domino effect begins: people are rapidly transformed into blood-sucking creatures and attack whatever stands in their way. Seok-wook and Soo-an are now aware of the danger and rush through the train carriages to survive; while running away from zombies they meet the film’s top-notch supporting characters: Sung-kyung (Jung Yu-mi: The Himalayas, Our Sunhi), Sang-hwa (Ma Dong-seok: The Unjust, One on One), a baseball team, Jin-hee (Ahn So-hee: C’est si bon, Mr. Go) – a cheerleader secretly in love with one of the baseball players Young-gook (Choi Woo-sik: In The Room, Okja), a couple of old ladies, a wicket train captain (Jung Suk-yong) and a mysterious homeless man (Choi Gwi-hwa). The film action takes the audience on and off the train. How long will they survive on the train? Will they reach their destination? You might also ask yourself who is gonna turn into Zombie next? 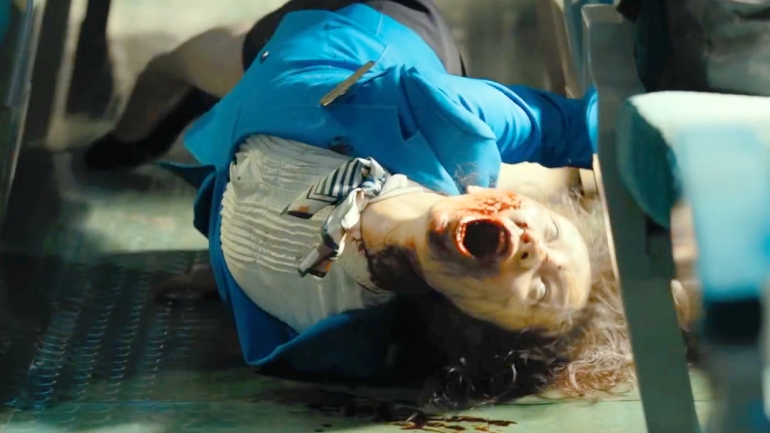 Train to Busan will not cause you at least one thing that you might expect: a heart attack. While zombie films generally fall into the horror genre, I would not classify Yeon Sang-ho’s production as such, simply because it is not scary enough. Still, the first 45 minutes or so were engaging enough to keep me seated, wanting to see more. It was certainly filmed well, given the confined space (most of the film takes place on a replica of a KTX train), and with a bunch of zombies – with superb make-up – it was sort of entertaining. Acting was delivered well by a great ensemble of actors, particularly Gong Yoo, Ma Dong-seok and Kim Su-an. What irritated me the most, though, were mistakes in the narrative itself; for instance: zombies bite extras who immediately turn into the undead; however, when other characters are bitten, it takes them more than 5 minutes to transform, as they are in need of giving passionate speeches before becoming zombies – no matter what film you watch, Korean productions never lack in emotional moments, even when that does not quite fit a film’s story.

Train to Busan’s narrative is an ordinary one, there is nothing spectacular about it; I feel like the filmmaker counted on action rather then developing an ambitious storyline. Train to Busan has a bunch of relatively fast zombies whose bites cause an infection that spreads within seconds (most of the time). The few interesting characters only partially added to the story – the writing is very generic. It is obvious that Yeon lost control over the second part of the film; I could only see repetitive dialogues and the same old ‘run-for-your-life’ kind of scenes. The film did not impress me in any way and it does not add anything significant to the zombie genre either. Yeon’s previous film The King of Pigs and the latest Seoul Station (prequel to the live- action Train to Busan) were – without a doubt – more realistic and engaging, even though both animated – these two particular productions grabbed me by the throat. Sadly, Train to Busan lacks rhythm and impressive narrative; it is just your run-of-the-mill zombie film; but even as such, it still stands above other Asian zombie film productions.